The new Arab Human Development report seeks to dispel misconceptions about young Arabs in the region. 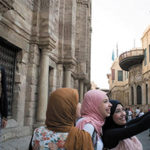 Beirut: Arab youth are suffering from pervasive social exclusion, the highest unemployment levels in the world, and low female labour force participation, the Arab Human Development Report for 2016 has found. The annual report, entitled,” Youth and the Prospects of Human Development in a Changing Reality”, was launched at the American University of Beirut in late November, 2016, by the United Nations Development Programme. The report brings to light a number of matters worth considering.
On one hand, the Arab region as a whole has achieved remarkable progress in educational enrolment and the fight against illiteracy, especially among women. Overall extreme poverty and hunger have declined, and there has been an increase in life expectancy.
Yet on the other hand, the region has witnessed a dramatic increase in armed conflict and violence. Fifteen years ago, when the first Arab Human Development Report, or AHDR, was published, five out of 22 Arab states were witnessing conflict or political violence. Today, this number has gone up to 11.

Pervasive Social Exclusion
Young people in the region are the main victims of this grim economic situation. They constitute the largest segment in society and suffer from pervasive social exclusion.
In the past couple of decades, the region has seen low economic growth with very little job creation, which has translated into a general decline in the standards of living for the majority of Arab citizens. Low oil prices have put government budgets, cross-border investments and workers’ remittances under stress, and Arab societies have witnessed a degradation of their social, physical and environmental capital. With more than 75 percent of the Arab population living in major cities in the region, one just needs to visit these urban areas to witness the extent of air pollution, degraded living conditions, shrinking public spaces and the general malaise of a majority of the population.
Unemployment among youths is the highest in the world at more than 30 percent; young women’s labour force participation is at an all-time low; and with an increasing education, most university graduates migrate when they can to find better opportunities abroad.
The less fortunate ones live idle lives, waiting for things to change. This has caused a delay in family formation and autonomy, a higher exposure to health risk factors, such as smoking and drug use, and ultimately pushed some youths to engage in extremist activities and armed conflict.
Yet the AHDR 2016 seeks to dispel several misconceptions about young Arabs that have been prevalent in previous analysis and reporting on the region. The first misconception is that the vast majority of young Arabs are prone to radicalisation and extremism.
A massive amount of recent opinion polling data analysed for the Report revealed that an overwhelming majority of youths reject terrorism and radicalisation, albeit remaining largely conservative in their social and religious attitudes.
The second misconception is that young migrants originating from Arab countries constitute a major threat to developed economies. The AHDR 2016 found that most Arab countries are marked by outward migration; yet, the vast stock of immigrants in Gulf Cooperation Council countries means that Arab countries as a whole receive more migrants – Arab and non-Arab – than they send out.
The third misconception is that following the failure of the 2011 uprisings, many young Arabs have become apathetic and less interested in civic engagement and political change.
Exposed to Globalisation
With an extremely high electronic connectivity – more than 70 percent of young people in the region have access to social media – Arab youths are more exposed to globalisation and connected than any other previous generation. This raises their expectations and aspirations, yet at the same time increases their frustration when nothing is improving in their daily life. The AHDR 2016 is a wake-up call for policymakers and citizens in the region to address the systemic issues that are plaguing their societies. Achieving peace and security is a core priority, with the necessity of increasing youth involvement in peace building and conflict resolution.
(The writer is a Lebanese Economist and Social Activist. He is an Associate Professor of Economics at the American University of Beirut. He recently served as the Lead Author of UNDP’s Arab Human Development Report 2016).
(Source: Al Jazeera)