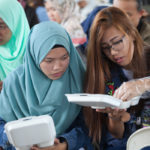 Marawi City: Philippines: Catholics in the battle-scarred southern Philippine city of Marawi have joined the predominantly Muslim community in welcoming the start of the month of Ramadan. A thousand Catholic and Muslim residents participated in the start of the “Duyog Ramadan” celebration spearheaded by the Catholic prelature in the city’s Datu Saber district on May 13. The annual celebration, which started in 1979, aims to encourage Christian families to “accompany” their Muslim neighbors in fasting, prayer and service to the poor. “Fasting and prayer are major commonalities among Christians and Muslims,” said Redemptorist priest Gary Alvarado, head of the group Duyog Marawi. Duyog Marawi is a rehabilitation project of Marawi’s Catholic prelature and the Congregation of the Most Holy Redeemer or Redemptorists in the war-torn city. The program encourages Christian families “to sacrifice one meal” in any day of Ramadan and to donate the cost of the meal to the rehabilitation of Marawi communities. (ucanews.com)