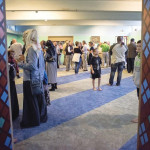 Breaking barriers in the community, Muslims have opened the doors of the first mosque in Janesville, in southern Wisconsin, USA, introducing true Islam to visitors. “People are worried that Muslims are some type of a threat,” mosque’s caretaker, Salih Erschen, told Gazettextra. “If they don’t know about the faith and the practices, ideas and what Muslims are focused on in life, then that causes a bit a fear. So I always encourage Muslims to open their doors and invite people in and talk about what our faith is and share. That’s been my approach, to try and be more and more open about it.” Erschen hosted the public gathering to help educate the community about Islam. The open-door policy worked well after several residents experienced Islamic culture firsthand as Erschen shared a short message about social injustice and Allah’s role in the world. Visitors included Christians from nearby churches who were curious about the mosque. “We have an interest in Islam, but not an interest in becoming Muslim,” Rev. David King of Christ Presbyterian Church on Wright Road said, speaking for himself and his wife, Priscilla King.