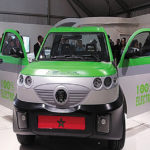 Marrakesh: The National Transportation and Logistic Company (SNTL) of Morocco revealed the world’s latest and newest innovation of the first electric pickup truck. The innovation, which is 100 percent electric, is also 100 percent” made in Morocco”, in terms of concept and assembly. The truck which took nine months to complete, was revealed at SNTL’s center of technology and innovation, “Tamayuz Supply Chain,” in Marrakesh recently. The center chose Engima, the Moroccan consulting firm specializing in automotive engineering, to work on the development and manufacturing of the electric pickup’s design. The electric vehicle prototype, which was adapted to fit the Moroccan market, does not require electric stations for it to be recharged. The pickup can be recharged in less than 7 hours in the comfort of one’s home, using a 220V power outlet, or in a mere hour if a supercharger is used. The designers of the vehicle claim that it is perfectly suited for urban journeys, with frequent stops, during which its speed can reach 129km/h, and its rear bed can bear up to 800kg of load. The most highlighted element of this innovation is that the users of the electric pickup truck can easily upgrade their vehicles without having to purchase a new one. Although designed, manufactured, and assembled in Morocco, the electric pickup innovation is intended to be primarily sold in the European market, while Morocco, until it is fully ready, will only be acting as a carrier market.