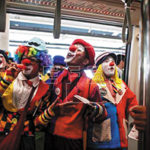 Passengers on a Light Rapid Transit train in the Malaysian capital Kuala Lumpur recently witnessed a curious sight during their journey: Muslim clowns raising donations for cancer-stricken children. About 14 clowns from the Muslim Clown Malaysia group rode on the train, performing tricks for commuters and collecting money for the charity Cancer Associates and Kindred Network. While on the train the group – consisting mostly of men but with a few women – made balloon animals and gave them to commuters, eliciting smiles and delight.
Once they arrived at the KL Sentral station the colorful troupe put on a small magic show and continued making balloon creatures and seeking donations. n