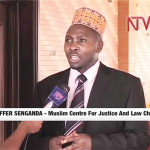 Debunking myths surrounding Islam and Muslims, Ugandan Muslim lawyers have started a new law center to advocate issues that affect the Muslim community and correct misconceptions wrongly associated with their faith. “Christians fear to employ Muslims because they think they are a security threat, terrorists and extremists,” Jaffer Senganda, founder and President of Muslim Centre for Justice and Law in Uganda, told OnIslam.net. “These stereotypes need to be watered down because we now emphasize the good side of Muslims and Islam through dialogue.” Senganda is one of the lawyers who started the Muslim Centre for Justice and Law along with other Muslim lawyers to advocate for issues that affect members of the Muslim community. This includes legal aid representation for Muslims without money and Muslim women. “We train Sheikhs, Imams, students and community leaders on peace building, interfaith work and the dangers of domestic violence,” Senganda said. (Extracted from
(www.onislam.net)