Islamic Voice 0 March, 2018 12:00 am
Hajj through Hajj Committee only for First-Timers
Ideas for Financial Inclusion of Indian Muslims Discussed at Harvard
68% Muslim to vote for Obama 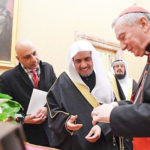 Jeddah: The Vatican Secretary of State, Cardinal Pietro Parolin met the secretary-general of the Muslim World League, Mohammed bin Abdul Karim Al-Issa, in his office.  Parolin praised the Muslim World League, which has its headquarters in Makkah. He also praised the efforts of the secretary-general for enhancing cooperation with the Vatican, especially after the historical meeting last September between the Pope and the secretary-general, in which they both stressed their commitment to open dialogue between Islam and Christianity. The Vatican secretary of state stressed the importance of positive relations between the league and the Vatican, and praised the commitment of both parties to fruitful and constructive dialogue. Al-Issa expressed his regret that 70 percent of wars throughout history were religious. Confronting extremism and counter-extremism was one of the major responsibilities of religious leaders, he said.