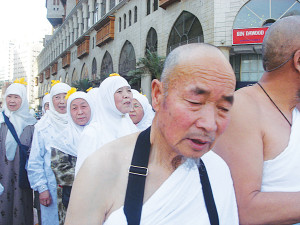 This year, an estimated 14,000 Chinese pilgrims will be performing the Haj pilgrimage. For the first time, Chinese pilgrims from Ningxia, an autonomous region will be performing the Haj this year. The first flight with 297 pilgrims from Ningxia arrived in Jeddah last fortnight. A total of 2,833 pilgrims are scheduled to arrive from this part of China. Some pilgrims expressed joy at being able to perform the pilgrimage noting that their parents had been unable to do so owing to the restrictions in the past, Chinese media said.
Around half of China’s 20 million Muslims live in Ningxia, where the people identify their ethnic group as Hui, a recognized minority in China. Unlike the Uighur Muslims in the autonomous region of Xinjiang, otherwise known as East Turkestan, where the Muslims are largely of a Turkic ethnic background, the Hui population is a Sinitic race that has accepted Islam. (Reported by Irfan Mohammed)