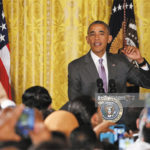 Washington DC: President Barack Obama praised the contributions of Muslim immigrants to the United States, saying any effort to discriminate against the Islamic faith plays into the hands of terrorists. “Muslim Americans are as patriotic, as integrated, as American as any other members of the American family. Whether your family has been here for generations or you’re a new arrival, you’re an essential part of the fabric of our country,” he said. The Obama administration has faced criticism for its plan to admit as many as 10,000 Syrian refugees to the United States this year, with some Republicans warning that violent militants could enter the country posing as refugees. While not naming Trump specifically, Obama said that discriminatory policies against Muslims are an affront to the “values that already make our nation great.”
(Reported by Ayesha Rascoe, Huffington Post)