Pope Francis began his speech with a quiet “as-Salaam-Alaikum,” meaning “peace be upon you”. The Pope spoke of Egypt’s “inestimable cultural heritage”. 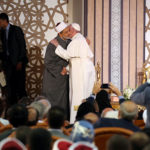 “Religious leaders must denounce violations of human rights and expose attempts to justify violence and hatred in the name of God”. That was the message of Pope Francis, global head of the Catholic Church, at the International Peace Conference held at the Al-Azhar, Cairo. The Pope’s words came at the start of his two day trip to Egypt. In his opening address to the conference, the Grand Imam of Al-Azhar, Sheik Ahmad Al-Tayeb expressed his appreciation for Pope Francis’ refusal to blame Islam for violence and terrorism and said militants had “carelessly” and “ignorantly” misinterpreted religious texts. “Islam is not a religion of terrorism,” he said.
In his speech, which opened with a quiet “as-Salaam-Alaikum,” the traditional Arab greeting meaning “peace be upon you, and which was regularly interrupted by hearty applause, Pope Francis spoke of Egypt’s “inestimable cultural heritage”. He stressed that such wisdom and open-mindedness is urgently needed today to ensure peace for present and future generations. Calling for respectful inter religious dialogue, he said the only alternative to a culture of civilized encounter is “the incivility of conflict”. He called for dialogue based on sincerity and the courage to accept differences. The Pope said that religion cannot simply be relegated to the private sphere but, at the same time, religion must not be confused with the political sphere or tempted by worldly powers that seek to exploit it.
Violence, the Pope stressed, “is the negation of every authentic religious expression” and religious leaders are called to “unmask” violence and selfishness masquerading as sanctity. Together, he insisted, “Let us affirm the incompatibility of violence and faith, belief and hatred”, upholding instead “the sacredness of every human life”.

Weapons ‘Feed the Cancer
of War’
Echoing the words of Sheik Al-Tayeb, Pope Francis also reiterated his appeal for an end to the arms trade, saying that if weapons are produced and sold, “soon or later they will be used”. Finally, the Pope stressed the importance of working to eliminate poverty and to combat the current rise of populism that does not promote stability and peace. Every unilateral action that does not promote constructive and shared solutions, he warned, is “a gift to the proponents of radicalism and violence”. What our world needs, he said, is peacemakers, not fomenters of conflict; firefighters, not arsonists; preachers of reconciliation, not instigators of destruction”.
The text of the Pope’s Address at the International Conference for Peace at Al-Azhar Conference Centre can be accessed on http://en.radiovaticana.va/news/2017/04/28/pope_at_al-azhar;_religious_leaders_must_unmask_violence/130871)
On the final day of his trip to Cairo, the Pope celebrated Mass in Latin and Arabic, where he focused his attention on the country’s tiny Catholic population, that forms a small fraction of Egypt’s Christians, who comprise some 10% of Egyptians. There, he reiterated the message that true religion has nothing to do with violence. “True faith is one that makes us more charitable, more merciful, more honest and more humane,” Francis told the 15,000-strong crowd during his homily. “It gives us the courage to forgive those who have wronged us, to extend a hand to the fallen, to clothe the naked, to feed the fallen.” “God is pleased only by a faith that is proclaimed by our lives, for the only fanaticism believers can have is that of charity,” he said. “While technically equal under the country’s laws, Egyptian Christians suffer from discrimination and are increasingly under persecution. But rather than listening to the voices of “destruction and condemnation,” the Pope called on Egyptian Catholics to be a “sign of hope” in their homeland so that they could “builders of bridges and agents of dialogue.”