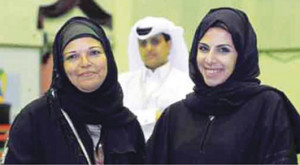 Qatar: Qataris have for the first time voted two women for the Gulf Emirate’s only directly elected body, the Central Municipal Council. Sheikha Jufairi and Fatma Al-Kuwari, both won seats in the elections to the 29-member Council, which has advisory, but no legislative powers. Elections director General, Majed Ibrahim al-Khulaifi confirmed that it was the first time in the Emirate’s history that two women had been elected. Jufairi is a political veteran by Qatari standards and has been on the Council since she was first elected in 2003. Kuwari, though, is one of the 14 first-time winners who will make up almost half of the membership of the new Council.