Islamic Voice 0 July, 2016 12:00 am
State of the Elderly in India
Pope Francis Calls for a Global Educational Pact
Dubai Ranked Number One in the World as Lifestyle Destination 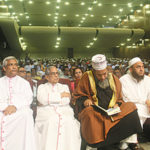 Dhaka: Leaders of four major religions have vowed to unite and promote religious harmony and combat a sharp rise in religious extremism and militancy in Bangladesh. The pledge came at an interfaith conference organized by Bangladesh police in Dhaka last month. The gathering brought together about 1,500 people, mostly leaders from Muslim, Hindu, Christian and Buddhist communities. The show of unity comes in the wake of a series of brutal attacks on liberal and progressive activists including secular bloggers, publishers, educators, and religious leaders by Islamist militants. Home Minister Asaduzzaman Khan said there was a “conspiracy to destroy religious harmony” in Bangladesh. “This is part of a conspiracy to destroy a long tradition of peace and religious harmony in Bangladesh,” Khan told the interfaith gathering. Holy Cross Archbishop Patrick D’Rozario of Dhaka said interfaith dialogue and efforts to strengthen harmony are vital in battling religious extremism. “We are passing through challenging times and we would like to overcome these challenges successfully,” the Christian leader said. Muslim cleric Maulana Fariduddin Masoud said Islam does not endorse violence. “The courts are entrusted to judge people if they commit any offense, but some misguided people are using violence in the name of Islam. This is un-Islamic,” said Masoud, head of Jamiat ul Ulema, which is carrying out a signature campaign to collect signatures from 100,000 Muslim clerics to declare an anti-militancy fatwa. “The rise of fundamentalism shows some weak points in the country’s culture of harmony, which must be mended”, stated Swami Dhruveshananda, a Hindu priest and principal of the Dhaka branch of the Ramakrishna Mission. Shuddhananda Mohathero, president of the Dhaka-based Buddha Kristi Prachar Sangha, a Buddhist religious and social organization, echoed the call. “One who truly loves his country and religion cannot resort to violent means. As religious leaders we must make strong efforts to educate others about inter-faith harmony,” the Buddhist monk said.