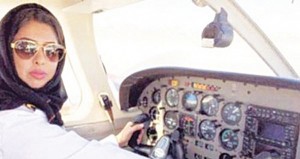 Dubai: Yasmeen Mohammad Al Mainmani started to dream about flying when she was just seven years old. She was not particularly dreaming of being a captain, as she was not sure what she wanted to be “ a hostess or a pilot.
But she still can recall how she loved flying at a young age.
Today, 23-year-old Yasmeen has fulfilled her dream. She was trained in flying academies in Jordan and the US and recently became the second Saudi women to receive a commercial pilot licence.
“After God, my family has the biggest role,” Yasmeen told Gulf News on the phone from Jeddah. “They stood next to me and supported me. I owe all this to my family.”
“My father took my hand and travelled with me to Jordan after I completed high school” in 2009 to join the flying academy, Yasmeen said.
She is happy to know that she was the only student in her class to join such an academy after, according to her estimates, between 30 per cent and 40 per cent of her classmates said they wanted to be pilots. Al Mainmani, a businessman and father of 12 children, expressed his “extreme happiness” at his daughter’s success in getting the commercial pilot licence.
In 2010, Yasmeen got a private pilot licence from Amman, and returned home in Jeddah, hoping to get a scholarship to continue her education. She said she preferred to be “independent” and not to seek financial help from her family.
“I tried everything but got nothing,” she said. She worked for Rabigh Wings Aviation Academy for a year. And, because of the media attention on her, Yasmeen became known and got an offer from Aerosim Flight Academy in the US to be their ambassador to the Middle East.
She was also offered a scholarship to be trained in the US to obtain an auto commercial pilot licence. She travelled to Florida and continued her education.
After completion of her training in June 2013, she returned to Jeddah, where she joined Nexus Company for flight operation services.
Recently, she passed the practical and oral tests of the General Authority of Civil Aviation (GACA) in Saudi Arabia and got the commercial pilot license to become the second Saudi woman to obtain what was looked at in the past as unthinkable.
Hanadi Zakaria Al Hindi was the first Saudi woman to become a commercial airline pilot. Before 2014, women were not allowed to take the test to receive the license. Women were simply not allowed to join aviation.
Still Yasmeen has not been given the green light to fly a commercial plane. She is waiting for an opening to apply for a job as she meets all the requirements. Meanwhile, she continues logging on flying hours.
The number of women captains are still very low even in other Arab countries where women are allowed to obtain the license and take the captain’s seat of a commercial plane.
Asked about the people’s general preference for a male captain in planes, she paused before responding. “Both men and women receive the same training. I don’t think you need big muscles to carry the plane on your head. The whole aviation field is about knowledge and information. It is about how much you know the system.” n
(www.gulfnews.com)