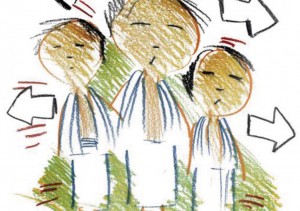 This was one group of Chinese pilgrims who could not fall back on the rapid strides made by their country in technology, and instead, they had to rely on sign language to get to their lodging. While more than 1.5 million pilgrims were removing their ihrams after finishing the grand day of Arafat standing, 35 Chinese pilgrims found themselves lost when their guide went missing, and they could not speak Arabic or E

nglish. They resorted to the sign language to get directions to the place they wanted to go.
This lost group, out of 11,000 Chinese pilgrims who came to perform the holy rituals, was lost in Mina. The group was doing the Jamarat ritual when they were lost. The language-handicapped pilgrims could only use the sign language.
The scout center in the city, the voluntary group that provides service to pilgrims, sent a scout to light the way for them on the first day of Eid, to get them safely to their lodgings.
The scout first had difficulty in counting their numbers as they switched places every time he started counting. To him, they all looked the same! Finally, he used sign language to get them stand in a queue to lead them. There was only one young woman among the 35 lost elders. Then they began their trek back to the blue camp, the assigned color for Asian pilgrims.