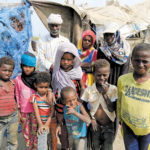 The Ruzaiq family outside their hut next to a rubbish dump where they collect discarded food and recyclables near Yemen’s Red Sea port city of Hudaida. Abdul Jabbar Zeyad/Reuters

A garbage heap has become a source of food for hundreds of Yemenis as the three-year war threatens millions with famine.
After relentless Saudi-led air raids near their home in northwest Yemen, the Ruzaiq family packed up their belongings and fled to the relative safety of Hudaida port on the Red Sea. But with no money or relatives to shelter them, the 18-member family joined a growing number of displaced Yemenis living on or next to the rubbish dump of the Houthi-controlled city. Despite the health risks, the dump has become a source of food for hundreds of impoverished Yemenis and young men, a chance to earn an income. “We eat and drink the food that is thrown away,” said Ayoub Mohammed Ruzaiq, 11. “We collect fish, meat, potatoes, onions and flour to make our own food.”
The United Nations estimates more than two million people have been displaced by the war, which intensified in 2015 when an Arab coalition led by Saudi Arabia intervened to try to restore President Abd-Rabbu Mansour Hadi to power after Houthi rebels forced him into exile. The war has killed more than 10,000 people, crippled the economy, caused a cholera epidemic and pushed the country to the verge of famine.