‘I am a Baby in Islam’: US Singer Della Miles

American singer Miles, vocalist for Michael Jackson and Whitney Houston, has converted to Islam, saying she learned much about the faith during her stay in Turkey, Anadolu Agency reported. “Everything is new for me at the moment,” said Della Miles.”I consider myself a baby in Islam because there is so much to learn.”Born into an extended family of 5 brothers and sisters, Miles was born into a musical family. Her mother sang and directed music in church while her father was a jazz enthusiast and owner of a music venue. Also a songwriter, Miles took to the stage with German actor and musician Marius Muller-Western hagen. In 2012, she took a leading role in the American opera Lulu and later portrayed the wife of former US President Barack Obama in Hope. The Obama Musical Story. Miles has also worked on tribute albums for Turkish musicians.
(Taken from aboutislam.net) 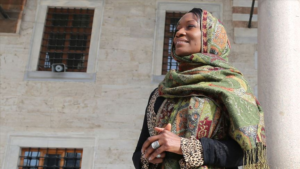