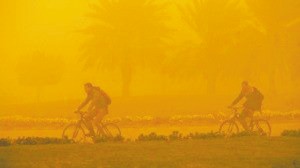 Dubai: Getting caught in a stingy blast of sharp sand will soon be a distant memory after a sandstorm forecaster was launched last fortnight, during the city’s GITEX tech tradeshow. The system is based on a current 3D weather prediction model used by Dubai’s municipality, with the forecaster adding information on sand source areas, transport by wind, and settling. “While sand storms are of natural occurrence, they can pose a great problem for human societies living near desert regions. The Arabian Peninsula experiences more frequent sand storms as compared to the other regions,” said Mohammed Mashroom, survey department director at Dubai Municipality, according to UAE-based news agency WAM. The system will utilize, among other methods of verification, real-time satellite images and aerodrome reports, and will allow authorities to include sandstorms in weather updates and, issue warnings. The device was developed by Dubai’s municipality and a Sharjah-based company.