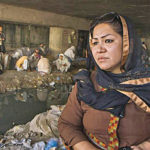 Kabul: Laila Haidari, a volunteer from Bamyan province in central Afghanistan, helps to treat female drug addicts in Kabul. She used to spend what she earned from her restaurant and carpet factory on addicts. “The majority of the children of women we treated were also addicts. These women had turned to drugs because of poverty, violence and war, and wanted to forget daily grief by using drugs, without knowing that the drugs will bring them lifetime calamity,” Haidari said. In 2013, she opened the ‘Mother Camp’ center to help children and women struggling with drug abuse, but she had to shut it down the same year after she received threats. “I was threatened by dealers and smugglers by phone,” she said. Haidari at that time had another center for men. She said that her center treated 4,000 men addicts: 1,000 of these resumed normal life and gave up their addition for good, which did not sit well with the smugglers and drug dealers. She said the government had not helped to protect her against the threats.
Opium cultivation and the use of drugs have become widespread in Afghanistan in recent years, despite an anti-narcotics drive costing hundreds of millions of dollars. Recently, the government said that there are nearly 1 million female narcotics-users or addicts in Afghanistan, a legacy of war, poverty and social disorder. A survey conducted mostly in rural areas in 2015 showed that about 3.6 million people either consumed drugs, were addicts or were directly affected, officials at the Ministry of Counter-Narcotics said. “Based on the survey, 1 million of the users were boys and girls under the age of 18, while some 850,000 were women,” the ministry’s chief spokesman Mohammad Haneef Daneshyar explained. He said Afghanistan produced 9,000 tons of poppy last year, which is refined into opium then turned into heroin.
(Extracted from arabnews.com)