Water Scarcity is leading to Conflicts

Islamic Voice 0 March, 2014 12:00 am
UK Gets Europe’s First Eco-Friendly Mosque
Rise of Birth Defects and Cancer in Najaf
How Islamic is the Caliphate? 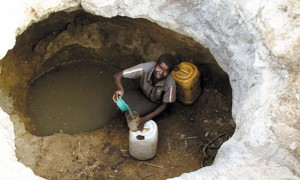 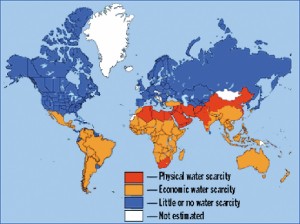 Water is the most essential resource for life. Life, be it for humans, animals or plants, cannot be conceived without water. It sustains both life and livelihood. Civilisations have risen and fallen with the rise and fall of water table.

With global population having exceeded seven billions, water is getting scarcer and scarcer. As more people stream into cities, even the little water is getting difficult to access.
People could be citizens of one or the other nation-state. But rivers are not the property of any particular state. They are part of a vast ecosystem and flow through several states. As more powerful among these states try to appropriate their waters, the weaker are bound to be deprived. Competing claims on rivers therefore lead to conflicts. Such conflicts are already aggravating relations between various states. Look at the following:

Pointers to the Crisis

Although food security has been significantly increased in the past thirty years, water withdrawals for irrigation represent 66 % of the total withdrawals and up to 90 % in arid regions, the other 34 % being used by domestic households (10 %), industry (20 %), or evaporated from reservoirs (4 %).
Total Water Availability on Earth
By modern estimates the Earth’s hydrosphere contains a huge amount of water of about 1,386 million cubic kilometres. However, 97.5% of this amount is saline water and only 2.5% fresh water. The greater portion of the fresh water (68.7%) is in the shape of ice and permanent snow cover in the Antarctic, the Arctic, and mountainous regions. Next 29.9% are fresh ground waters. Only 0.26% of the total amount of fresh waters on the Earth are concentrated in lakes, reservoirs, and river systems. They are most accessible for economic needs and very important for water ecosystems
Every year the water turnover on Earth involves 577,000 cubic km of water. It is the water that evaporates from the oceanic surface (502,800 cubic kms ) and from land (74,200 cubic kms). The same water amount falls as atmospheric precipitation (on the ocean 458,000 cubic kms and on land 119,000 cubic kms). The difference between precipitation and evaporation from land surface (119,000 – 74,200 = 44,800 cubic kms per year) represents the total runoff of Earth’s rivers (42,600 cubic kms per year), and a direct groundwater runoff to the ocean (2200 cubic kms per year). These are the principal sources of fresh water to supply life necessities and man’s economic activities.
Can the Water supply be Augmented?
What is clear from the above statistics is that the humanity has been using the same water all through the centuries. So, how could the water supply be augmented? Where should be human being look for more water? Answer lies is conservation of water sources, treat and clean the waste water and use it again, at least for cleaning and washing purposes and water-harvesting i.e., collecting the rainwater and using for human needs as well as allowing it to percolate through the ground to recharge the ground aquifers.
Most facts for this piece have been extracted from economist Brahma Chellaney’s book Water, Peace and War: Confronting the Global Water crisis, Oxford University Press.
Also referred were:
http://webworld.unesco.org/water/ihp/db/shiklomanov/index.shtml
http://webworld.unesco.org/water/ihp/db/shiklomanov/summary/html/summary.html#4.2.