We are Overusing Earth’s Resources

We are just past yet another Earth Day on April 22. We need to question if we are concerned at the deteriorating conditions of our environment that threatens the existence of man, animals and the vegetative cover.
In this context the Living Planet Index is a vital indicator of the health of the Earth we live upon. Living Planet Index Report is produced every two years in collaboration with Zoological Society of London and Global Footprint Network. 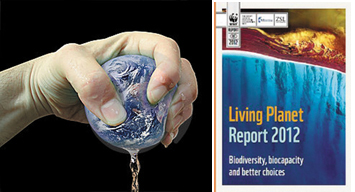 Highlights of the Report
* Each year the Earth is losing 24 billion tons of fertile soil affecting 1.5 billion people globally.
* The harvesting of marine fish has gone up from 19 million tons in 1950 to 87 million in 2005. This has led to overexploitation of fish resources.
* One-third of the world’s oceans and two-thirds of conti­nental shelves are now exploited by fisheries, with only inaccessible waters in the Arctic and Antarctic remaining relatively unexploited.
* The maps show the geographical expansion of world fishing fleets from 1950 to 2006 (the latest available data). Since 1950, the area fished by global fishing fleets has increased ten-fold. By 2006 100 million km2, around 1/3 of the ocean surface, was already heavily impacted by fishing.
* The report, which measures the health of 9,014 populations of more than 2,600 species, reveals a 30% decline in the health of species since 1970. And it shows that we’re consuming 50% more natural resources globally than our planet can sustainably produce.
We need 4 Earth Like Planets if we want to live like those in the US
Jim Leape of World Wildlife International (WWF) which is the co-publisher of the Living Planet Index with European Space Agency, points out that we are living as if we have an extra planet at our disposal. We are using 50 per cent more resources than the earth can provide, and unless we change course, by 2030 even two planets will not be enough for our needs. The Report says: If everyone lived like an average resident of the USA, a total of four earths would be required to regenerate humanity’s annual demand for nature”.
David Nussbaum, CEO of WWF-UK, says: “If we continue to use up our planet’s resources faster than it can replace them, soon we’ll have exploited every available corner of the Earth.”
Demand on natural resources has doubled since 1966 and we are currently using the equivalent of 1.5 planets to support our activities.
High-income countries have a footprint five times greater than that of low-income countries. Areas of high biodiversity provide important ecosystem services such as carbon storage, fuel wood, freshwater flow and marine fish stocks. The loss of biodiversity and related ecosystem services particularly impacts the world’s poorest people who rely most directly on these services to survive.
If all of humanity lived like an average resident of Indonesia, only two-thirds of the planet’s bio-capacity would be used; If everyone lived like an average Argentinean, humanity would demand more than half an additional Planet; and if everyone lived like an average resident of the USA, a total of four earths would be required to regenerate Humanity’s annual demand on nature.
Some countries with high biocapacity do not have a large National Footprint. Bolivia for example, has a per capita footprint of 2.6 GHA and a per capital biocapacity of 18 GHA. However it is worth noting that this biocapacity may well be being exported and utilized by other nations. For example, the Ecological Footprint of a citizen of UAE is 8.4 GHA, but within the country there is only 0.6 GHA of biocapacity available per person. The residents of UAE are therefore dependent on the resources of other nations to meet their needs. As resources are becoming more constrained, competition is growing; the disparity between resource-rich and resource-poor nation is highly likely to have strong geopolitical implications in the future.
Forests
The carbon storage service provided by the world’s forests is vital for climate stabilization. The amount of carbon stored in different for­ests varies: Tropical forests store the most carbon. Almost half of this above-ground carbon is in the forests of Latin America, with 26 per cent in Asia, and 25 per cent in Africa. Globally, around 13 million hectares of forest were lost each year between 2000 and 2010. De­forestation and forest degradation currently account for up to 20 per cent of global anthropogenic CO2 emissions “ the third-largest source after coal and oil.
Freshwater ecosystems occupy ap­proximately 1 per cent of the Earth’s surface yet are home to around 10 per cent of all known animal spe­cies. The rapid development of water management infrastructure “ such as dams, dykes, levees and diversion channels “ have left very few large rivers entirely free flow­ing. Of the approximately 177 rivers greater than 1,000km in length, only around a third remain free flowing and without dams on their main channel.
(Source: http://assets.wwf.org.uk/downloads/lpr_2012_summary_booklet_final_7may2012.pdf)