Members adopted a unanimous declaration in which they pledged to make sustained efforts to preserve and promote the potential of science. 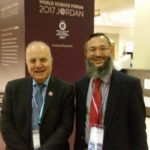 The Eighth World Science Forum (WSF), the world’s largest biennial science event on global science policy, was held at Dead Sea, Jordan, during 7-11 November 2017 (http://worldscienceforum.org/). As Dead Sea is 430m below sea level, it is the Earth’s lowest point on land! This year’s WSF attracted 3,000 attendees from 140 countries, including scientists, policymakers, Noble Laureates and academics and investors. This year’s banner for the WSF was “Science for Peace”. Speaking from the lowest point on earth, leaders (Kings, Presidents, Princesses and Ministers) called for the nations of the world to work with the scientific community to address the challenges confronted by the humanity today.
The WSF 2017 was held under the patronage of King Abdullah ibn Al Hussein of Jordan and his cousin, Princess Sumaya bint El Hassan, Chair of WSF 2017 and President of the Royal Scientific Society. Welcoming the audience to the event, King Abdullah expressed his hope that Jordan will act as an accelerator of global scientific collaboration, opportunity, and peace. In a speech at the opening of the forum, Hungarian President JÃ¡nos Ãder said “the region is extremely rich in historical lessons. In the 21st-century societies, adequate energy supplies are also vital for social harmony. Without energy, it would be impossible to operate all the industrial, transportation, security and health infrastructure that we have created in recent decades. Depleted energy supplies could lead to social collapse and war.”
The World Science Forum series was inspired by the success of the meeting “World Conference on Science for the Twenty-First Century: a New Commitment”, held during 26 June to 1 July 1999 in Budapest, Hungary, and convened by the United Nations Educational, Scientific and Cultural Organization (UNESCO) and the International Council for Science (ICSU), in co-operation with other partners. At the concluding session of the World Science Forum 2017, participants issued a global call to action for science and society to facilitate the role of science in addressing global challenges through science and evidence-informed policy. Members adopted a unanimous declaration in which they pledged to make sustained efforts to preserve and promote scientific capacities and harness the potential of science, technology and innovation to promote equal opportunity based sustainable and peaceful development.
(The writer can be reached at [email protected]
Department of Mathematics and Sciences, College of Arts and Applied Sciences, Dhofar University, Salalah, Sultanate of Oman)