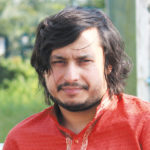 London: Muslim travel writer, Tharik Husain, who has been uncovering some of Europe’s forgotten Islamic history for nearly two decades, launched London’s first European Muslim Heritage Exhibition, last month. Hosted at the London Muslim Center in the heart of Tower Hamlets, east of the capital, the exhibition attracted a diverse crowd of both Muslim and non-Muslim visitors, with a sold-out launch event. The exhibition highlights a selection of photographs from Husain’s travels across Europe, Spain, Bulgaria, Estonia, France and England, as part of his quest of uncovering the continent’s forgotten Muslim heritage, Al Arabiya reported. Highlights in this section include a photo of a medieval Muslim tomb in the Balkans, today revered by both Christians and Muslims, one of a ninth century coin found in Estonia minted by the Muslim Abbasid caliphate in Baghdad, and a man worshipping in the mosque that was home to Britain’s earliest indigenous Muslim community who were led by converted Victorian Lords and Ladies. Speaking to Al Arabiya, Tharik explained how the exhibition serves a role in debunking the popular myth that the heritage of Europe is exclusively Judeo-Christian: “Not many people would know, for instance, that Muslims have in fact been part of Europe’s evolving cultural identity for 14 centuries.”