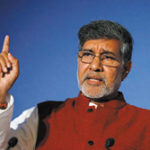 Minneapolis: “Islam means peace”, Nobel laureate Kailash Satyarthi said as he decried the backlash against Muslims and made a strong call to nations to welcome refugees, particularly children, and not generalise them based on the actions of a few who have “tarnished” the image of Islam. “Islam means peace. There are hundreds of references) in the Quran where peace, justice, freedom and equality are taught,” Satyarthi said at the opening of the 2016 Nobel Peace Prize Forum held under the auspices of the Norwegian Nobel Institute in Minneapolis recently. Satyarthi said it was unfortunate that a “handful of people” were “manipulating” Islam and bringing a “bad name” to the religion for their selfish “political” ends and sometimes “emotional” reasons, when Muslims across the world have been ambassadors of humanity and peace and people from Muslim countries have shown courage to speak out the truth.