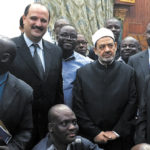 Cairo: Islam prohibits attacks on any human being, whatever their religion, the Grand Imam of Al-Azhar Mosque, Cairo, Professor Dr. Sheikh Ahmad Muhammad Al-Tayyib, has said. He denounced the terrorists as misguided self-seekers and called for concerted efforts in training Muslim leaders and the local imams in Africa as a tool against terrorism. While emphasising that Islam is peace loving, Dr. Ahmad decried the senseless acts of beheading, bombings and explosions committed by the terrorists as a savage crime.
The Grand Imam was hosting over 40 media managers and editors from 23 African countries who recently visited him at the Al- Azhar University in Cairo.