Although I’m a Buddhist, an outsider to­ Islam, nevertheless I have been voluntarily making efforts as a defender of Great Islam
By His Holiness the Dalai Lama 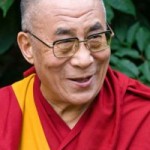 I would like to say something concerning religious harmony. Sometimes, conflicts involve religious faiths. For instance, previously in Northern Ireland, although the conflict was basically a political issue, it quickly became a religious issue. This was very unfortunate. In Sri Lanka as well, although the conflict there is also political, yet in some cases one gets the impression that the conflict is between Hindus and Buddhists. This is really terrible. In ancient times, followers of different religions were mostly isolated from each other. But now they are in much closer contact and so we need to make special efforts to promote religious harmony.
On the first anniversary of September 11, a memorial prayer ceremony was held at the Washington National Cathedral. I was at that meeting and I mentioned in my talk that nowadays, unfortunately, some people create the impression that because of a few mischievous Muslims, all Muslims are militant and violent. They then speak of a clash of civilizations between the West and Islam. This is unrealistic.
It is absolutely wrong to characterize a whole religion as bad because of a few mischievous people. This is true regarding Islam, Judaism, Christianity, Hinduism, and Buddhism all alike. For example, some followers of the protector Shugden killed three people near my residence. One of them was a good teacher who was critical of Shugden and he received sixteen knife wounds. The other two were his students. Those killers were really mischievous. But because of that, to say that all of Tibetan Buddhism is militant “ no one would believe this.
Since September 11, although I’m a Buddhist, an outsider to­ Islam, nevertheless I have been voluntarily making efforts as a defender of Great Islam. Many of my Muslim brothers “ very few sisters “ explain to me that if anyone creates bloodshed, this is not Islam. The reason is that a true Muslim, a true follower of Islam, should have love towards the entire creation the same way, as he or she has love towards Allah. All creatures are created by Allah. If one respects and loves Allah, one must love all His creatures.
In Muslim countries, bank interest is discouraged. So, if we know Islam and we see how followers of Islam implement it sincerely, then like all other religions, it is truly wonderful. In general if we know others’ religions, we can develop mutual respect, admiration, and enrichment. Therefore, we need constant effort to promote religious interfaith understanding.
In Lisbon recently, I attended an interfaith meeting in a mosque. That was the first time that an interfaith meeting was held in a mosque. After the meeting, we all went into the main hall and did silent meditation. It was really wonderful. Therefore, always make effort for interfaith harmony.
Some say God, some say no God “ that is not important. What is important is the law of causality. This is the same in all religions “ don’t practice killing, stealing, sexual abuse, lying. The different religions may use different methods, but they all have the same purpose. Look at the results, not at the causes. When you go to a restaurant, just enjoy all the different foods, rather than argue that this food’s ingredients come from this or that. It’s better to just eat and enjoy.
So, those different religions “ rather than argue that your philosophy is bad or good, see that they all teach compassion as their purpose and goal, and that they all are good. Using different methods is realistic for different people. We must adopt a realistic approach and view.
Inner peace is related with compassion. All major religions have the same message “ love, compassion, forgiveness. We need a secular way to promote compassion. For those people who have religion and who are sincere and serious in it, one’s own religion has great potential to further increase our compassion.
We need a secular way to promote secular ethics. Secular does not mean to be against religion or to have disrespect for religion. When I say “secular,” it is like in the Indian constitution. Gandhi emphasized secular religion: he did prayers from all religions. “Secular” means no preference of one religion over another, but to have respect for all religions, including for nonbelievers. Therefore, we need secular ethics through secular ways, on the basis of education about common experience and scientific evidence.
(Excerpts from Dalai Lama’s talk in Milan, Italy, 9 December 2007
Transcribed and lightly edited by Alexander Berzin)