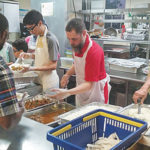 Recently, more than 20 teams from mosques, Muslim student clubs, and faith-based non-profits signed up to serve in soup kitchens across the country for USA’s first National Muslim Soup Kitchen Day. The volunteers cooked and distributed more than 3,000 meals throughout the day in New York, Florida, Alabama, and seven other states, according to the Muslim Soup Kitchen Project (MSKP), the New York-based organization that coordinated the national event. Uzma Popal, director of MSKP, said that this is the kind of charity that Muslim non-profits and other faith-based service organizations perform regularly. At a time when more Islamophobic rhetoric and hate crimes seem to be on the increase, Popal said that she hopes the national service day will help create unity.
(Extracted from www.huffingtonpost.com)