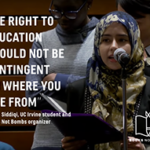 A group of Muslim women students at colleges across the United States are part of the Books Not Bombs campaign, an initiative organized by The Syria Consortium to help Syrian refugees access education. The campaign launched last year, Books Not Bombs organizers “ who are primarily Muslim women “ have been ramping up their efforts. Across the USA, more than 18,000 students have got involved with Books Not Bombs since its inception “ signing petitions, holding protests, and staging silent demonstrations “ and have helped launch programs expanding access to education for immigrants and refugees. At Barnard College in New York, organizers set up a scholarship programme for displaced women. University of Southern California students created an emergency fund for refugee students affected by Trump’s travel ban. And Books Not Bombs activists around the country have lobbied their administrations to speak out and defend immigrant student populations. “Education is a human right,” said Reem Karmouta, a Books Not Bombs organizer at the University of California Los Angeles. “Books Not Bombs hopes to assist in providing equal opportunity for education for all, especially those, like Syrian refugees, who can no longer access institutes of higher education [in their home countries due to conflict].”