Islamic Voice 0 October, 2013 12:00 am
Where Are the Muslim Scientists?
50% of Students in Technical Professions are Women Here
UN Hails Iran’s Support for Foreign Refugees 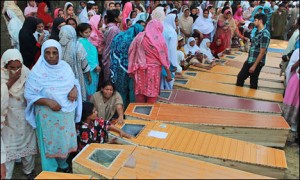 There are roughly 60 or more so-called Muslim countries. Some estimates say there are about 1.5 Billion people who claim to be Muslim. When I converted to Islam shortly after September 11, 2001 and no the irony isn’t lost on me, I learned that even though it took a horrific terrorist attack on my country to get me to study Islam, the religion in of itself is peaceful. I learned that Muslims are supposed to be defined by their excellence of character as a virtue of the blessings inherent in submitting to the will of The Creator. That means that Muslims are supposed to be honest and trustworthy, help those who can’t help themselves, be a defender to the defenseless, stand up for what is right, and never be the cause of enmity, strife or injustice in the world.
Muslims are supposed to respect and protect the places where God’s name is remembered and praised whether it is a Church, Synagogue, Temple, or Mosque. Muslims are supposed to be those in whom all neighbors whether they are Muslim or not, feel safe and protected. These were the lessons I learned in 2001 soon after those calling themselves Muslim did the complete opposite in their attacks on America in New York and Washington, DC.
The lessons of what it means to be a Muslim and the virtues that are supposed to be apparent in every Muslim is and has been continually repeated and taught to me over these past 12 years and though I have no doubt in the teachings of Islam, I’m beginning to wonder that maybe just maybe those who share my understanding of what Islam is are not the same as those who are the leaders of Muslim countries, many of the citizenry, and of course the Al-Qaeda and other affiliated terrorist groups.
Maybe what separates us is more than language, theological understandings, or geography. Maybe the very fundamental beliefs about what comprises a Muslim and what does not is our distinguishing factor and I for one feel that it’s time to either stop calling those who would destroy museums, cities, and priceless artifacts, those who would attack civilians and kill people while they shop or worship, those who have no respect for the decency of every human being to live the life God gave them in peace, maybe it’s time to stop calling these savages Muslim or let them have the word and those of us who know Islam take on a different name.
How much longer can we Muslims sit back and issue our condemnations, write our apologies, and wring our hands in frustration as we watch entire populations and people under siege? Whether it’s Christians, Ahmadis, and other minority groups being slaughtered in Pakistan, or innocent men, women, and children both Christian and Muslim being killed in Palestine, Egypt, and Kenya, and terrorist attacks and threats too numerous to name, how much longer are we going to look towards the West to solve issues that 60 plus supposed Muslim countries should be able to fix themselves? What are all these heads of state doing in these countries?
While we write and give speeches, animals are rampaging in the streets in our Muslim countries taking unholy actions and saying they are doing it in our name! Call me naive, but I don’t think a multi-page fatwa, a well written press release or op-ed, or an appearance on television or radio is going to stop bullets or bombs anytime soon. In truth, I believe that the only way to deal with this menace is a combination of education, policing both internal and external, actual physical confrontation, and the will to see the eradication of tyranny and savagery in the name of Islam and Muslims removed from the Earth by any means necessary. But that will happen when pink elephants fly most likely, as too many would rather wait until the West sends in troops only to complain later that the West sent in troops.
It’s time that so-called Muslim countries act like it. It’s a shame that as a Muslim living in the West that I don’t feel that I can visit most Muslim majority nations for fear that someone calling themselves a Muslim would harm my person in some way. Yet, we tolerate this and we respond with an op-ed rather than calling on the governments and the people to stop proclaiming that which they are not prepared to enact.
Maybe it’s just me, but I’m sick and tired of hearing about the beasts in Muslim countries creating havoc in the streets and causing terror in the hearts of their neighbors. I’m also tired of even here in the US, whenever there is a peace initiative, interfaith initiative, or any other activity that by definition should be led by Muslims as well, these events are rarely if ever facilitated by Muslims or Mosques, but that’s another topic for another day. Simply put, I’m tired of Muslims and look forward to fellowship with those who practice Islam.
Source: http://salaamsblog.wordpress.com/