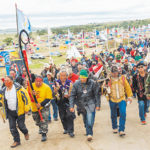 Indigenous people from across America have issued a rallying cry in defense of the earth at the Sacred Stone Camp in North Dakota, USA, and many faith traditions are heeding their call. Members of nearly 300 different Native American tribes gathered at the Sacred Stone Camp to protest the Dakota Access oil pipeline. They claim the $3.8 billion project would snake across lands they consider sacred and are burial sites, and could pose a threat to the water supply that serves the Standing Rock Sioux Reservation, which lies just south of the pipeline’s proposed route. Federal agencies have agreed to temporarily stop construction on the pipeline on land that is particularly significant to the Standing Rock Sioux Tribe. However, the tribe’s court battle against the pipeline is ongoing. Several different progressive Christian religious denominations, as well as the Jewish Voice for Peace, have demonstrated their solidarity with this movement, which at its core, is a prayerful and spiritual protest. In recent weeks, American Muslims have signaled that they are also entering the fray. A coalition of Muslim organizations is teaming up to spread awareness about the gathering in North Dakota” and inspiring the American Muslim community to get involved. Spearheaded by the activist groups Muslim Anti-Racism Collaborative, and MPower Change, the coalition has raised over $12,000 online to support the Sacred Stone Camp. The funds will go towards supplying the camp with items like water, propane, food, and blankets, or towards the legal costs associated with protesting the pipeline in court. n
(Extracted from http://www.huffingtonpost.in)