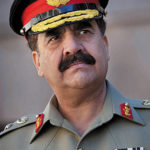 Riyadh: Just retired Pakistan Army Chief, General Raheel Sharief has reportedly consented to head the Islamic Military Alliance to Fight Terrorism which includes 39 Islamic countries, but keeps away Iran, a major regional power in the Middle East. The Alliance was set up by the Saudi regime in Riyadh in December 2015. The Alliance was brought into existence with moves initiated by Saudi Arabia to fight the ISIS in regions falling in Iraq, Syria and Turkey. It is the first major military alliance to come up within the OIC countries. Of the 39 countries included, Turkey is part of NATO.