The Free Encyclopedia has 23 million articles on its web-pages written by 1.5 million people around the globe. 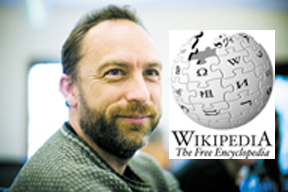 World population today stands at seven billion. About half a billion of them rely on Wikipedia”the Free Encyclopedia for information, which everyone can access for free on the Internet. Currently, it is the largest source of written information on both the stock subjects as well as developing issues.
Wikipedia was launched 12 years ago by Jimmy Donal Wales and Larry Sanger on January 15, 2001.
The most distinctive feature of Wikipedia is that anyone can write for it and its content is open to frequent editing and updating. More than 1.5 million people around the world have contributed articles to Wikipedia’s which has currently 23 million articles. Any estimate about the articles can only be subject to a precise time on the clock because by the time you will finish this piece in Islamic Voice 40 new articles might enter the Wikipedia. Nearly, 12,000 entries are created every day. Authors could be anyone, from any corner of the world, including you. Its contributors have ranged from a seven-year boy to a 73-year old professor. But the core community of contributors are estimated to be 12,000 people who are mainly techno-savvy, largely male (9 out of 10 contributors being so), intellectually confident, argumentative, and thick-skinned.
Founder Wales is a US citizen born in Huntsville, Alabama where he attended Randolph School and later took a bachelor’s and master’s degree in finance. In the beginning it was called Nupedia but later took the name Wikipedia. It has become the most popular encyclopedia and this led to Timemagazine listing him among the world’s 100 most influential people in 2006. The Wikipedia is owned and run by Wikimedia Foundation, a no-profit company.
Since the content is sourced from anywhere, one could question the credibility of such a work which does not undergo the rigours of editing which makes the content credible and accurate. Even Wikipedia does not claim accuracy and credibility for all that it has to offer. If the content of a particular article looks less than credible, partisan, biased or even slightly inaccurate, the website page would tell the same with a small logo of an unbalanced scale.
Since truth cannot be established on a long-running issue, theWikipedia takes the risk of publishing all that is available on an issue at a particular point of time and allowing readers to criticize or challenge its contents. If editing is required, it will be carried out later. This is bit ticklish as long running feuds, unestablished scientific theories, historical facts and shifting borders between nations urge changes in the content. Balance and non-partisanship too is difficult to maintain in issues such as Palestine-Israel conflict where one’s views are heavily influenced by his location across dividing lines of religion, ethnicity, geography and fear of being prosecuted (such as anti-Israeli content being banned by law in the US). Today, the article on Arab-Israel dispute is 10,000-word long and has undergone editing 5,000 times by 1,800 persons of nearly a dozen countries.
Wikipedia is now referred to as a public utility with everyone, free to access it and benefit from the content.
(Source: Compiled from material collected from various sources including article on its founder from Wikipedia itself.)