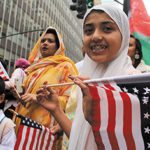 Houston, USA: A group of Muslim Americans have put up a billboard in Missouri denouncing ISIS, saying that people should stop conflating the terrorist group
with Islam. Tariq Malik, a Chesterfield resident who helped organise the effort behind billboard, said that he and his peers want to halt a perception that Muslims aren’t speaking up enough against ISIS. “These acts are being done in the name of religion, which really has nothing to do with the religion,” Malik said, speaking of terrorism. “It just has to do with radical people taking on their own agenda and hijacking the name of Islam.”