Liverpool Arab Art Festival – The Lighter Side of Middle East 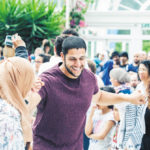 Liverpool was the first city in Britain to be awarded the title , “European Capital of Culture” in 2008. It is also home to a sizeable Arab population, particularly Yemenis who were the first known Arab community. One cultural draw growing in popularity and stature in the city is the Liverpool Arab Art Festival (LAAF) which was held from 15-24 July, 2016. Celebrating its 15th anniversary this year, it is a celebration of all things Arabic. The festival showcased stand-up comedians, talks, film, live music and spoken word across different venues and spaces throughout Liverpool.
Under the theme of “Undocumented” – it explored the various ways art can provide a deeper insight into the human experience of lives devastated by war, displacement and conflict. It opened with The Queens of Syria, a play written and performed by an all-female cast of Syrian refugees. A screening of the Palestinian film, Speed Sisters, highlighted the five-woman-team taking to the racing circuits of Palestine, and Arabs Are Not Funny, the stand-up comedy show originally from London, had the crowds roaring in laughter. Taher Qassim MBE, the chair and founder of LAAF, is a Yemeni who has been living in Liverpool for 20 years. Qassim, who launched the first Arab Art Festival 15 years ago, proclaimed this year’s event was already the most successful to date with “the depth of the programme of the ten days being very rich”.