Islamic Voice 0 January, 2017 12:00 am
Texas Man’s Message for American Muslims
Time to Rediscover the Spirit of the Faith
Safe in Sarajevo 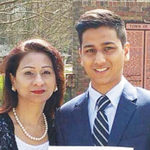 Mother Teresa always was a figure admired across religious divides, so it seems only fitting that an international prize named in her honor went this year to a Muslim who died in Dhaka, Bangladesh, trying to save two friends from a terrorist attack. On Nov. 20, the family of 20-year-old Faraaz Hossain was presented with the 2016 Mother Teresa International Award for Social Justice in Mumbai. Former Afghanistan president Hamid Karzai, and Sister Priscilla of the Missionaries of Charity, handed over the award to Faraaz’s mother, Simeen Hossain, and elder brother, Zaraif Ayaat Hossain. The honor is bestowed by an Indian NGO dedicated to preserving Mother Teresa’s legacy, and this marks the first time it has been awarded to a non-Indian posthumously. In the wake of the July 2016, terrorist attacks in Dhaka by self-styled ‘Islamic’ militants, Hossain’s story spread quickly around the world. Hailed as a model of bravery and selflessness, Hossain, a student at Emory University in Atlanta (USA), was visiting family back home in Bangladesh when he was caught up in the 10-hour hostage crisis on the evening of July 1. When gunmen professing loyalty to the Daesh terrorist group insisted on separating Bangladeshis from foreigners, Hossain refused to desert his two female friends. Those friends were Abinta Kabir, a Bangladesh-born U.S. citizen and a fellow student at Emory University, and Tarishi Jain, an Indian student at the University of California, Berkeley, with whom he had gone to the café on that fateful night. The gunmen were looking for non-Muslims, offering a test as to who could recite verses from the Quran and who couldn’t. Hossain passed and was given a chance to leave but refused, and his body was later discovered with wounds suggesting he had tried to fight back against his assailants.