“No to War”! – World Religious Leaders Speak Out Against Terrorism and War 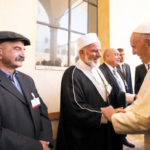 Assisi (Italy): Pope Francis, head of the Catholic Church, and leaders of other world religions said “No to War!” recently, vowing to oppose terrorism in God’s name and appealing to politicians to listen to “the anguished cry of so many innocents”. This get-together of religious leaders took place recently at Assisi, the central Italian city that was home to St. Francis, the 13th century Christian saint revered by many as a patron of peace and nature and a defender of the poor. The Pope closed a three-day meeting where about 500 Christian, Muslim, Jewish, Buddhist, Hindu, Shinto, Sikh, Zoroastrian and other community leaders discussed how members of their communities could better promote peace and reconciliation. Near the end of the gathering, members of these religious communities joined each other in a square outside the basilica where St. Francis is buried. Prayers were said for the victims of war, including in Syria and Afghanistan, and for the refugees fleeing the conflicts. “Only peace is holy, and not war,” the Argentine-born Pope said. In a final appeal that the leaders signed and gave to children from around the world, they vowed “to oppose every form of violence and abuse of religion which seeks to justify war and terrorism.” “No to war! May the anguished cry of the many innocents not go unheeded. Let us urge leaders of nations to defuse the causes of war: the lust for power and money, the greed of arms’ dealers, personal interests and vendettas for past wrongs,” the appeal said.