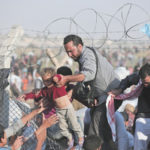 The number of people displaced by conflict is at the highest level ever recorded, the UN says. It estimates that 65.3 million people were either refugees, asylum seekers or internally displaced at the end of 2015, an increase of 5 million in a year. This represents one in every 113 people on the planet! Over half of the total comes from just three countries: Syria, Afghanistan and Somalia. Meanwhile, the UN refugee chief says a worrying “climate of xenophobia” has taken hold in Europe as it struggles to cope with the migrant crisis. In its annual report marking World Refugee Day, the UN said “it was the first time the number of refugees worldwide had passed the 60m mark. Half of all refugees are children under 18″. Turkey is the biggest host country for refugees worldwide, with 2.5m people, followed by Pakistan and Lebanon.