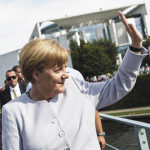 German Chancellor Angela Merkel has said it is “unacceptable” for European Union member states to refuse to accept Muslim refugees. “What I continue to think is wrong is that some say, ‘we generally don’t want Muslims in our country, regardless of whether there’s a humanitarian need or not,'” she said. Some eastern EU members, such as Hungary, Poland, and Slovakia, have refused to take in any refugees under an EU-wide quota system amid opposition from right-wing nationalists. Slovak President Robert Fico said he would “never bring even a single Muslim into his country”. Czech Prime Minister Bohuslav Sobotka said he does not want a “large Muslim community, given the problems we are seeing”. In 2015, the scale of the refugee crisis prompted Ms Merkel to waive Germany’s right to send thousands of refugees back to the southern European countries where they were first documented. Germany took in around a million asylum seekers, mostly from Syria, Iraq or Afghanistan. This year it expects up to 300,000 more people to arrive.