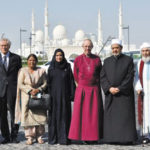 Abu Dhabi: Religious leaders from the Muslim Council of Elders “ an independent international body that aims to promote peace in Muslim societies”and the Anglican Church recently jointly called for setting up a peaceful and integrated world. Dr Ahmad Al Tayyeb, Grand Imam of Al Azhar, Egypt’s highest religious authority, appealed for peace and understanding between Muslims and Christians, saying “as the very survival of the world itself is perhaps at stake, we Muslims and Christians should let the unpleasantness between us become a thing of the past”. Stressing that if Muslims and Christians are not at peace, the world will not be at peace, the Grand Imam quoted the Swiss Catholic theologian Hans Kung as saying: “No peace among the nations without peace among the religions.” Dr Al Tayyeb said Islam highly appreciates efforts to make people happy, have mercy on animals and protect plants and nonliving things. “So let our differences not cause hatred and strife between us. Let us vie with each other only in righteousness and good works,” the Grand Imam of Al Azhar said. n
(Source gulfnews.com)