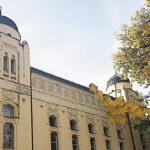 Anti-Semitism is on the rise in parts of Europe. But in this Muslim-majority country in Europe, Jews say they couldn’t feel more at home
The small Jewish community in Sarajevo totals between 600 and 700 people, some 60 to 70 percent of the estimated 1,000 Jews in Bosnia and Herzegovina, a community that has existed there for 450 years. The smallness of the community is actually one of the biggest challenges facing Jews in Bosnia and Herzegovina today. Between 2002 and 2012, there were 43 funerals and two newborn babies in the community. Then, in 2014, 10 new babies were born. In 2015, 12 children joined the community, a veritable baby boom. Now the community is even considering whether it should open a kindergarten. “We feel integrated but not assimilated,” said Jakob Finci, the president of the Jewish community in the country, and former ambassador to Switzerland. “The door to our synagogue is always open, and we don’t have any heavy guard,” said Finci. “If I count from 1995, we have never had any attack on the Jewish community,” Finci says. “We feel safe with this openness.”
“People in Bosnia can distinguish between Israelis and Jews in a way that other people often don’t,” Finci said. “This is a country with more than 50 percent Muslims. A lot of the population are more on the side of the Palestinians. But this does not affect their attitude toward Jews or local Jews.”
(Extracted from www.dw.com)