Islamic Voice 0 August, 2016 12:00 am
Enjoining the Good and Forbidding the Wrong
How to Treat the Prophet’s (Pbuh) Advice
Doing Good with God’s Bounty 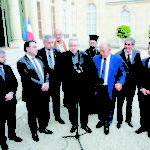 Paris: France’s main religious leaders have sent a message of unity and solidarity following a meeting with French President Francois Hollande, after two extremists attacked a Catholic church and slit the throat of an elderly priest, last month. Hollande was presiding over a defense council and cabinet meeting after speaking with Roman Catholic, Orthodox, Muslim and Jewish leaders. The attackers took hostages at the church in Saint-Etienne-du-Rouvray, in the northwest region of Normandy, during morning Mass. A nun at the Mass slipped out to raise the alarm and both attackers, one of them a local man, were then killed by police outside the church.
Cardinal Andre Vingt-Trois, archbishop of Paris, called on Catholics to “overcome hatred that comes in their heart” and not to “enter the game” of the Daesh group that “wants to set children of the same family upon each other.”
The rector of the main Paris mosque, Dalil Boubakeur, said France’s Muslims must push for better training of Muslim clerics. Candles were placed in front of the town hall as residents called for unity. “We are scared,” said Mulas Arbanu. “But, be we Christians, Muslims, anything, we have to be together.”