Being good to neighbours holds the key to fraternal peace and communal harmony. The Holy Prophet (Pbuh) held this as an essential attribute of a believer on the day of judgement.

“Gabriel has continued to strongly recommend me to be kind to my neighbour until I thought that he would make him among my heirs.”
(Related by Al-Bukhari, Muslim, Malik and others). 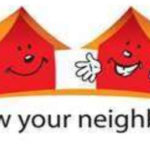 Islam aims at creating a society which does not only implement Allah’s laws, but also adopts certain values which ensure its strength as a coherent, caring society where everyone feels his or her importance to the community. None is left to waste or suffer on his own. An Islamic society is one where every individual is important and everyone enjoys the protection of the community. It is needless to say that every member of society has a duty and a responsibility towards his community. In return, he enjoys the care and protection of that community.
In order to create a solid basis for its closely-knit community, Islam begins by encouraging good-neighbourliness. One of the worst social acts a person can commit is to be unkind to his neighbours. The reasons for this insistence on good-neighbourliness are too obvious to need any discussion. In a neighbourhood where people quarrel and one set of neighbours try to harm another, there is no chance of harmony prevailing there. Indeed, people try to move out from such an area, peace being the basic condition for development. It is not surprising, therefore, that the Prophet should emphasize on every occasion, the importance of good-neighbourly relations.
The Prophet (Pbuh) is quoted by his wife Ayesha, as saying: “Gabriel has continued to strongly recommend me to be kind to my neighbour until I thought that he would make him among my heirs.” (Related by Al-Bukhari, Muslim, Malik and others). This Hadith which has been widely reported, in different chains of reporting, is highly significant. Moreover, it is phrased in a way which leaves no doubt where the order to be kind to neighbours comes from. It is Gabriel, the angel, who is recommending the Prophet to take such an attitude to his neighbours. Gabriel, as an angel, does not initiate anything from himself. He simply carries a message from Allah to His Prophet and conveys it in its entirety. Allah describes angels in the Quran as creatures who do not disobey Allah whatever He bids them, and they do what they are bid. (66:6) So, when Gabriel makes a recommendation to the Prophet, he simply conveys to him what Allah wants him to convey. That recommendation is, then, an order given by Allah.
We also note that the recommendation has been repeated again and again in order to create a certain impression in the mind of the Prophet. Again, Gabriel was acting on Allah’s order. It is Allah who wants him to repeat this recommendation time after time.
Simple Order or Recommendation
The Prophet was the best man to understand what Allah wants of him. A simple order or recommendation would have been adequate for the Prophet to understand that he should be kind to his neighbours. This Hadith suggests something more. It implies a certain duty which should not be neglected for any reason whatsoever. This we understand from the fact that the recommendation was frequently repeated by Gabriel who was acting on Allah’s order.
We can also form an impression of what that recommendation was like. It must have emphasized the fact that a neighbour has a very strong claim on those who live in the same area with him for the Prophet to have the sort of impression which he has specified. In other words, when we treat our neighbours kindly, we are only giving them that to which they are entitled to by right. The kindness should be mutual since we, as their neighbours, are entitled to the same right. When people in any neighbourhood act on this recommendation, or to be sure this order, then that neighbourhood is bound to be happy and strong. Everyone will enjoy the feeling of belonging to a good community which cares for him and for his interests and provides him with protection.
The Prophet tells us that Gabriel continued to urge him repeatedly to be kind to his neighbours inasmuch as he thought that the next thing he would say would be that neighbours were entitled to a share of the inheritance of their neighbours like their own relatives. That gives neighbours a degree very close to that of people’s own relations. It makes them almost of the same family. Had that been ordered, every neighbour would have had such a share of inheritance, be he a righteous person or a wrongdoer, a friend or a foe, a local person or a stranger who has moved in recently, a good member of the locality or a bad one.