We tend to spend lot of our leisure time sitting, putting us at risk of obesity. 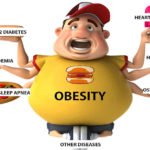 According to WHO data, worldwide, more than 1·9 billion adults are overweight”of these over 650 million are obese. 41 million children under the age of 5 years and 340 million children and adolescents aged 5″19 years are overweight or obese. Obesity is a major risk factor for non-communicable diseases, such as cardiovascular disease, diabetes, and several cancers. Crucially, obesity is preventable. So how it is that obesity has nearly tripled worldwide since 1980’s?
A rapid increase in food production and thus an increase in food portion sizes; accelerated marketing of unhealthy foods, availability, and affordability of energy dense foods (fast foods) and widespread introduction of cheap and potent sweetening agents, such as sweetened fruit flavoured drinks and soft drinks, which infiltrated the food system and affected the whole population simultaneously.

Leisure Time Sitting
At the same time, the effect of technological development has reduced physical effort out of our environment. Cars, television and computer games are examples of technologies that have had such effects in recent decades. We tend to spend lot of our leisure time sitting, putting us at risk of obesity.
Along with obvious complications such as Type 2 diabetes and heart disease, obesity increases the risk of developing certain types of cancers, and a host of other conditions such as osteoarthritis, gallstones, gynaecological disorders, sleep apnoea and depression

So What Do We Do? -Ways of Tackling Obesity
Although weight loss may seem like an insurmountable task in obese individuals, an important message is that even a 10% decrease of body weight markedly lowers your risk. Weight loss is achieved by a combination of dietary changes and exercise.

Act Now “ Lose Weight Sooner rather than Later
It’s possible we only have a limited window of opportunity in which to do something about excess weight. After this time, carrying excess weight may become harder. If any small excess in body weight is addressed you are more likely to succeed.

Lose Weight in Small Increments
The goal is to lose a small amount of weight and then to take a break, maintaining the new body weight for a period of time before losing another small amount. This way the body is gently challenged to redefine its baseline body weight until the final weight-loss goal is achieved.
The food we eat has the biggest impact on our waistlines: you can’t run off a bad diet
Increase physical activity “ take steps instead of the elevator, walk our children to school or park your car further away and walk to office.

Engage Young Adults and Children
Prevention is Always Better than Cure
Change their dietary behaviours. Avoid highly refined carbohydrate diets and sugar sweetened beverages. Encourage a diet containing fruits and vegetable- rich in natural antioxidants, fibre “ nuts and whole grain and increase the intake of oily fish instead of red meat.
Encourage physical activity; limit the time spent in front of TV, computer games and smart phones. There is also evidence that physical activity and participating in organised sports and after school clubs is linked to improved academic performance.

Heed Public Support for Government Intervention
There is a need to regulate the food industry improve the food we all eat, starting with lowering sugar and calories, improved labelling.
Also regulate food and beverage advertising – restricting television advertising to children. Prohibiting beverage company sponsorship of children’s sports. Avoiding celebrity endorsements of unhealthy foods.
Obesity is a complex problem with many drivers, including our behaviour, environment, genetics and culture. However, at its root obesity is caused by an energy imbalance: taking in more energy through food than we use through activity. Physical activity is associated with numerous health benefits, improved quality of sleep and maintenance of a healthy weight. However long-term, sustainable change will only be achieved through the active engagement of schools, communities, families and individuals.
(Dr Tasmia Tabassum is Consultant Physician and Diabetologist, Primecare hospitals)