Islamic Voice 0 May, 2018 12:00 am
Makkah Grand Mosque to expand Ten-fold
Fireflies: Where Squirrels and Centipedes Party Together!
Resource Distribution: The Natural Way

It was the first university in India to adopt a native language, Urdu, for imparting of higher education 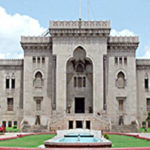 Hyderabad: The Osmania University concluded its centenary celebrations on April 24. It was the first university in India to initiate imparting of higher education through one of the native languages of India, Urdu in this case. It was founded following issuance of a firman by then Nizam, Mir Osman Ali Khan, in April 1917, which stated that the University was designed to take full advantage of “all that is best in the ancient and modern systems of physical, intellectual and spiritual culture”.
The firman stated that a University should be established in the Hyderabad dominions in which the ancient and modern, oriental and occidental arts, sciences are synthesized in such a manner that the defects of the present system of education are rectified. Since Urdu was the official language of the Hyderabad state, it was chosen as the medium of instruction. But at the same time, the teaching of English was made compulsory in order that students could extract whatever is best from foreign languages.
In order to realize this objective, a Dar ut-Tarjuma or Bureau of Translations and Compilations was set up in August the same year. Moulvi Abdul Haq was appointed as its Director. The Bureau translated hundreds of book pertaining to the humanities, natural sciences, geography, law, engineering, medicine, education, fine arts etc. The commendable work was widely appreciated by visiting scholars from all over.
Nobel laureate Rabindranath Tagore after visiting the Bureau observed: “I have long been waiting for the day when, freed from the shackles of a foreign language, our education becomes naturally accessible to all our people. It is a problem for the solution of which we look to our native States, and it gives me great joy to know that your State proposes to found a university in which instructions are to be given through the medium of Urdu. It is needless to say that your scheme has my fullest appreciation”. Freedom fighter and first Indian Governor General of India C. Rajagopalachari described Osmania University as ‘the true vidyapeeth’.
The Nizam had wished that the University should cooperate with other universities in India ‘in developing national ethos by the creation of an academic institution in which national integration is a noble ideal and a tangible reality’.
The first Intermediate exams were conducted by the University in 1921, first degree (BA) exams in 1923 and the first MA and LLB exams in 1925. The University College of Medicine was founded in 1927. Ph. D. programmes were initiated in 1938. The Arts College, which enrolled 143 students in the first year, grew in strength with 465 students taking admissions in the very next year. The students’ strength had gone up to 17,350 by 1948, the year of the Police Action which brought the Nizam’s dominion into the Indian Union.
The University sought the services of eminent scholars from India and abroad to teach at the Arts College and thereafter all other faculties that came up one by one. Several of the famous scientific research institutes in Hyderabad such as Rasadgah-e Nizamia (Nizamia Observatory) and Industrial Laboratory became precursors of Centre for Advanced Study in Astronomy and Regional Research Laboratory (RRL).
Later, Urdu was replaced by English as the medium of instruction of the University. Several faculties were added between 1948 and 1968. Several research institutes were added, and distance education centres were opened.