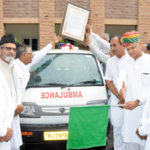 July 13, 2016
“Hard work paid off,” says Mohna Ansari, the only woman in the five-member NHRC commission, which has tackle... More
Prev Post INSA Award for Jamia Teacher
Next Post Bappu Haji - An Octogenarian Who Lives Only to Serve Others