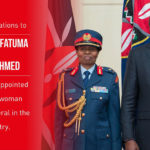 Fatuma Ahmed became the first Kenyan female soldier to be sworn in as major general of the Kenyan military. At a swearing-in ceremony held in Nairobi, Kenyan President Uhuru Kenyatta told Ahmed, who also became the first Muslim woman to hold such a high rank in the Kenya Defence Forces, that she was a role model to many women in Kenya. “Major General, “I am looking to you and counting on you to be a positive role model for other women in this Republic and to show and to prove to them that there is no limit for Kenyan women and that everything is possible.” he said. Kenyatta also promised the military, full support in fighting terrorism.