New Delhi (Asia News/ Agencies): K. V. Rabiya, an Indian Muslim woman, is one of this year’s recipients of the Padma Shri, one of India’s highest civilian awards, officially conferred on the country’s Republic Day.

She had to deal with polio, cancer, and a broken back in her life, but this hasn’t stopped her work to improve literacy among the poor in rural Kerala.

Born in 1966 in a village near Tirurangadi, Malappuram district, Rabiya found herself in a wheelchair due to polio at the age of 14. Nevertheless, she launched a campaign for adult literacy in her village in June 1990; her grandmother was one of her pupils.

In a few years, that experience led to the creation of Chalanam (movement), which Rabiya chairs. The association runs six schools for disabled children and has undertaken several initiatives to empower women, develop programmes and build facilities in the poorest areas.

Rabiya did not stop even when, in 2000, she found herself fighting cancer at the age of 34. She underwent chemotherapy giving hope to other patients. Once healed, she performed the Hajj, the Muslim pilgrimage to Makkah, in 2002.

In 2004 she faced another major test when she broke her back, further reducing her ability to move.

Despite being bedridden, she wrote her autobiography, Swapnangalkku Chirakukalundu (Dreams have wings), published in 2009.

“God is great,” she said when she was told that she had been awarded the Padma Shri. “The country has recognized my work and honoured me.” 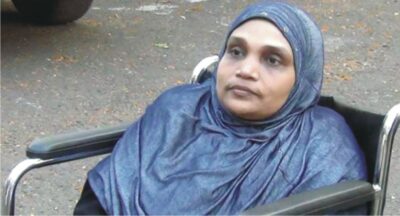 “Getting knowledge is foremost and imparting this to others is equally important,” she added. “I feel education serves its purpose only if you impart the same to others and empower them.”