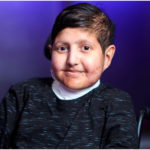 MoinYounis was diagnosed with EpidermolysisBullosa when he was just two months old (Image: Daily Mirror)

Moin Younis has defied medical opinion throughout his life, since the moment his parents Mohammed and Shafia were told he would not live beyond his first birthday. Now 17, he inspires others around him as an ambassador for Acorns Children’s Hospice in the UK, offering advice and support to other desperately ill children. He was diagnosed with Epidermolysis Bullosa when he was just two months old. The life-limiting condition means he lacks the protein needed to bind the layers of his skin together, so it tears and blisters at the slightest touch. Moin – one of the only people in the world with the most severe type of EB – has scarring across his body as well as wounds which will never fully heal. He says: “You can imagine cutting yourself or burning yourself – now just think for a second how much it would sting.””That’s pretty much how I feel everywhere. I go to sleep at night hoping to not wake up the next day, so I do not have to go through this routine.” Each day Moin spends over an hour soaking his bandages in the bath so they can be removed before Shafia applies fresh bandages – a painful process that sometimes takes up to five hours. But despite his many challenges, Moin is committed to making a difference to the lives of others. In his role as a Young Ambassador at Acorns, he has a real say in ways the charity can improve its services. He gives tours to visitors at Acorns and flies the flag for the hospice through social media. Chris Reed, Head of Care at the Hospice in Birmingham, says: “He’s one of a kind. The challenges he faces every day are immense and I don’t know how he does it, how he carries on and maintains that funny and cheeky manner that we all love. Once you’ve met Moin, you don’t forget him. He takes on life with incredible courage and guts and he’s incredibly frank and open about his struggles.” Moin was shortlisted for Pride of Britain after winning a Pride of Birmingham Award earlier this year. The Daily Mirror’s Pride of Britain Awards honour the Britain’s unsung heroes. The awards ceremony is now in its 19th year.
(Extracted from mirror.co.uk)