Work and Art as Worship 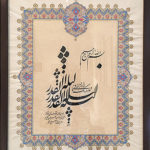 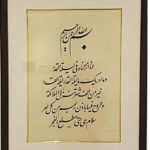 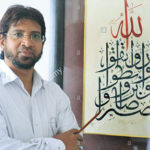 Amidst the chaos in busy Bangalore is a man who works quietly with his hands and heart with pens and paper, creating beautiful works of classical-style calligraphy that will take your breath away!
Muqtar Ahmed, one of India’s most renowned calligraphers, has carved his name in the hall of fame in this art. Born to a farming family near Hyderabad, he studied in an Urdu-medium school and also worked at a cycle shop. Muqtar’s job involved write down the names of the people who hired cycles. It so happened that one day a calligrapher named Hafiz Usman visited the shop. Noticing Muqtar’s beautiful handwriting, he introduced him to Ustad Zakir al-Hashmi and Gazi Tahiruddin Qaisar, two prominent calligraphers practising and teaching their art in Hyderabad’s Chhatta Bazar, a centre for Urdu printing. After spending some time with them as a calligrapher, Muqtar left for Bangalore in 1990 and started working as a calligrapher for the Urdu newspaper ‘Salar’. Urdu newspapers still employed calligraphers then”computers had not yet arrived on the scene.
But when computers landed inside newspaper offices, their calligraphers found themselves hit hard by the digital onslaught. “Many other calligraphers began to move away from the art and took up other jobs,” Muqtar relates. “I feared that this beautiful art was going to fade away into oblivion. It was tough, but I stuck on to the craft. The difficulties brought out the best in me. I continued doing calligraphy for wedding cards. I decided to master the art. My mission was to save traditional calligraphy.”
His urge to refine his calligraphic skills led Muqtar to contact the America-based master calligrapher Mamoun Sakkal, and Mohamed Zakariya, another American master of Arabic calligraphy ( who designed the U.S. Eid postage stamp. “Meeting them changed my outlook towards the art, and introduced me to classical international Arabic calligraphy,” says Muqtar. What followed was four-and-a half-years of correspondence study with Master Mohamed Zakariya, from whom he learnt different styles or scripts of calligraphy. In those pre-email days, Muqtar would send his calligraphy pieces by post and his master would post back the pieces with corrections!
In 2008, Muqtar visited Istanbul, Turkey, where he further refined his calligraphic skills from world-renowned master calligraphers Hasan Ãelebi and Dawood Biktash over a period of three months .
Muqtar now works to revive the art form in India and teaches Arabic calligraphy to interested students free of cost at the Institute of Indo-Islamic Art and Culture in Bangalore, which was setup by the Bearys Group in 2010. “My own calligraphy masters, as well as masters in the past, never charged their students. I am following that tradition of teaching and learning,” Muqtar says. More than 500 students have so far studied under him.
Muqtar has been widely recognized for his talents. In 2016, his work was awarded the second prize at the Cairo International Festival for Arabic Calligraphy from among 700 works by 115 participating artists from 15 Arab and other countries.
Muqtar’s calligraphic pieces adorn mosques in different parts of the world, international exhibitions and drawing rooms. In 2003, he became the only Indian to obtain an “Ijazah” (Masters diploma) from the Istanbul-based Research Centre for Islamic History, Art and Culture (IRCICA) of the Organisation of the Islamic Cooperation (OIC).
Calligraphy is a form of worship for Muqtar. “Writing Quranic verses and Hadith is worship. These works are a means of sawab-e-jaria (continuous reward),” he says. When you practice calligraphy, he explains, you are training your heart to be calm. “This art involves your brain, your eyes and your heart to work in cohesion.”
(Muqtar Ahmed can be reached at Bearys Horizen, No. 21 Wood Street, Richmond Road, Bangalore 560025. Ph: 9845788484)