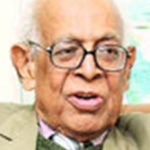 Former Indian Foreign Service (IFS) officer and MP, Syed Shahabuddin, who was suffering from prolonged illness, passed away on 4th March. He was 82. Mr. Shahabuddin, who is survived by his wife and four daughters, was buried at Panjpeeran cemetry in Nizamuddin (New Delhi). Born in 1935 in Ranchi, now in Jharkhand, Mr. Shahabuddin joined the Indian Foreign Service in 1958, but took premature retirement in the 1970s to delve into politics. As a diplomat, he lobbied for the creation of Bangladesh and rallied support in Latin America “ where he was posted at that time “ for Indian intervention in the affair. Although considered to be in the good books of the then Prime Minister Indira Gandhi, he was one of the few diplomats who were openly anti-Emergency. Within eight months of relinquishing service, he was elected to the Lok Sabha in 1979 from Kishanganj in Bihar, a Muslim majority constituency that sent him to Lok Sabha multiple times.