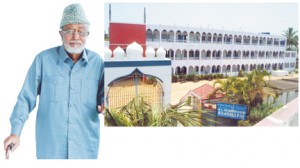 Educationist and founder of Al-Mahmood group of educational institutions in Bhadravathi and Shimoga, Alhaj B.S. Nazir Ahmed who died on March 11 in Shimoga has left a void in public life of the twin towns of Shimoga-Bhadravathi. He was 76.
Pioneer of Phoolban Nursery School movement in the district in 1971, Nazir Ahmed, a Germany trained engineer at the a Karnataka government owned Visveswaraya Iron and Steel Limited, Bhadravathi, set up the Al-Mahmood Education Trust in 1974. A strong advocate of firm educational foundation among kids, Nazir Ahmed and his co-activists like Major Khaleelur Rahman from Bangalore undertook whirlwind tour of the districts of Shimoga, Chikamagalur and Bellary in the early 1970s. He was instrumental in setting up dozens of Phoolban Nursery schools which imparted education through Urdu medium or with Urdu as a principal language. These schools later led to springing of several Urdu medium high schools in these districts.
He set up the Al-Mahmood Primary School in Bhadravathi in 1974 with the help of Major Khaleelur Rahman and his wife Sayeeda Begum. The school became a nucleus of education among Muslims in the town which had sizeable Muslim population but no modern educational institutions till then. There was no looking back since then. The school grew into a High School, Pre University College and still later into Al-Mahmood Degree College and Al-Mahmood B.Ed College. Simultaneously, the nursery school in Bhadravathi too progressed into a high school and later Pre University college. The group of institutions today have nearly 1,500 students.
Nazir sahib was a never-say-die activist and would remain active from daybreak till the dead of night, dedicating every single moment to the development of the institutions. His efforts to start Urdu schools blazed a trail of Urdu education in the region compelling several Government schools to add Urdu sections.
However, he had his setbacks too. Due to dearth of students, he had to close down the Al-Mahmood Degree College in Shimoga and the two schools in villages of Holehonnur and Holelur. However, a study centre of the Maulana Azad National Urdu University, Hyderabad which was set up a few years ago, has filled this gap to some extent. Paucity of good teachers too dogged him for long till he was sanctioned the Al-Mahmood B.Ed College in 2005.
His stint in Germany had enabled him to view from close quarters the experiment in Nursery education. In an interview to this journal several years ago, Nazir sahib had observed: “The age between 3 and 6 years plays a crucial role in an individual’s life. Habits and traits developed in this stage play a major role in shaping the adult life. If children are carefully groomed during this period, their mannerism, thought process, intellectual life will bear an indelible stamp of the impressions gained during this period. An English adage says: ‘There is a world of difference between one and six years but very little difference between six and sixty years’.” (ref. Islamic Voice, November 2000 issue.)
Nazir Ahmed is survived by his wife, two sons and a daughter. He had been ailing for some time. He was buried the same day after funeral prayers held in the premises of the Al-Mahmood B.Ed College was attended by thousands of mourners.